This article is about the book Secret Water. For the waterway of this name, see Secret Archipelago.

Secret Water is the eighth book in Arthur Ransome's Swallows and Amazons series of children's books. It was published in 1939.

This book is set in late August or early September 1932, towards the end of the summer holidays (immediately following We Didn't Mean To Go To Sea and located in and around Hamford Water in Essex, close to the resort town of Walton-on-the-Naze. It brings the Swallows and the Amazons together and introduces a new group of characters, the Eels.

Ransome used to sail to Hamford Water, an area of salt marshes and low lying islands in his yacht Nancy Blackett. He set the book in this tidal location which offered a new setting for his characters and opportunities to explore and map the area. (The names Hamford and Walton are not used in the text.)

The Swallows intend to sail in the Goblin to Hamford Water and camp with their father Ted Walker, but he is called away on naval business. Instead he maroons them with a small dinghy on an island. Before he leaves he gives them an outline map of the area, which they decide to call Secret Water, and suggests they survey and chart the area before he returns to pick them up. For a surprise, he has arranged for the Amazons to come down from their home at the Lake and join them with another dinghy.

They see some mysterious footprints which turn out to belong to the Mastodon, a local boy. He mistakes them for the Eels, another family who camp in the area regularly. The Swallows and Amazons form an alliance with the Mastodon, becoming blood brothers and sisters with him. Later the Eels arrive and are initially hostile before they settle down for a friendly war.

There is tension between Nancy and John as John wants to finish the map for Daddy: "Oh but look here, Nancy" said John, who saw her turning savage before his eyes. "We’ve simply got to finish the map. The last two days we’ve done hardly anything." (SW19). When the Amazons arrive Nancy says "You’ll get a medal from the Royal Geographic Society .... The Walker Expedition." Both John and Titty noticed that she said "you" instead of "we." (SW11). So due to the distractions of war and to being cut off by the tides, it seems the chart will not be completed, but at the very last minute, it is (by Nancy & Peggy plus Titty & Roger).

References to other books in the Swallows and Amazons series place Secret Water after Pigeon Post (set at the very beginning of the summer holiday) and We Didn't Mean to Go to Sea (set in August (WD3,14); therefore in late August or early September 1932: 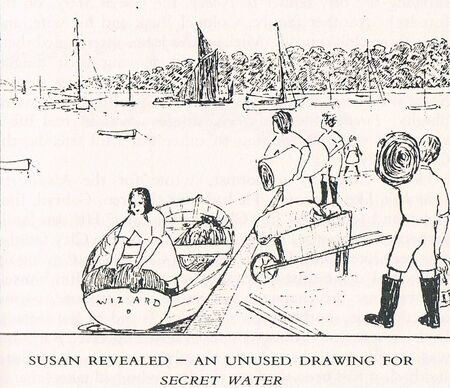 Descriptions of things that happened in the 'Interregnum' between WD and SW point to the events described in Secret Water starting very shortly after, but at least a day or two after, the end of WD:

Numbers are days (but not actual dates) in late August or early September 1932, names are chapter titles tide times for some days given in (parentheses), with references.

After: The Walker family hope to meet the Lapwings next holidays and invite them to Shotley where the Walkers will now be living (SW31).